I'm not a big fan of just criticizing. I prefer to offer better alternatives. However, today I'd like to criticize the financial media in general.

It's not that there isn't news to be reported or information to be shared. It's just that the noise-to-signal ratio is too high to have much value, unless one has special talent in tuning out the noise.

I believe the main reason for all the noise is that opinions are free and everyone has one. Moreover, when financial reporters are paid big bucks to have an opinion, they're guaranteed to have one, and possibly a different one every day, since old news is, well, just that.

When people in general focus on what they do everyday they often get so specialized that they forget that their world is not the whole world. When I go see my optometrist, she tells me to wash my eyelids 3 times a day with warm, soapy water. My dermatologist suggests that I wear sunscreen everyday, even if I spend the whole day indoors inside an office. How many times would a dentist recommend one flosses and brushes? And yet, by eating right and exercising I'd have a much bigger payout in terms of long-term health than following all the specialists' recommendations.

Likewise, financial reporters must talk about the market. And so they do. If it's going up, there's a reason for it. If it's going down, there's another reason or sometimes the same reason as yesterday -- "investor's sentiment", they'll say.

Over-analyzing stock charts and daily fluctuation of the markets has been shown time and again to be foolish. It only tells you what the majority of the market participants (by volume of money, not number of people) think the right price for the market is. Everyone has an opinion, and by following the opinion of the average market participant or that of the financial reporter at best only guarantees you're one step behind everyone else. At worst, it leads to financial destruction.

You should have your own opinion and not let those paid to have opinions -- whether the opinions are right or wrong -- guide how you should invest your money.

What to do then?

Collecting data and analysis based on data is the first step to forming your own opinion. There are respectable services out there that can help with that, such as Morningstar and Standard & Poors. However, none of these should be used as the final decision. Blindly following their star ratings is a recipe for disaster, no matter how well-trained the analysts might be.

Because it's not their money that is on the line. It's yours.

Second, because often times the recommendations are delayed, or are not updated frequently or both. And on top of that, their criteria for what a suitable investment might be is most likely completely different than yours.

The following is a chart of WMT as provided by S&P's free stock report, which can be obtained from many known online brokerages. 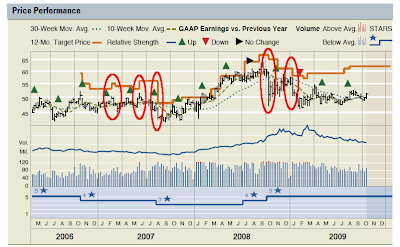 The red ellipses are my addition highlighting periods where their target price tag (the line in orange) changed. Were these changes due to some clever insight or a knee-jerk reaction to the price change? Is it really possible to beat the market by being one step behind it? I'll let you be the judge of that.

In summary: turn off the TV and tune out the noise. Use analysis services as necessary, but as a source of information, not as a recommendation.

Disclosures: I own WMT at the time of writing. I was not compensated in any way for mentioning the names of the companies mentioned above.