Longevity: will we live longer than our parents and grand parents?

I'm feeling a bit philosophical today, so here's a bit of an unusual theme for me: speculation about my generation's longevity. 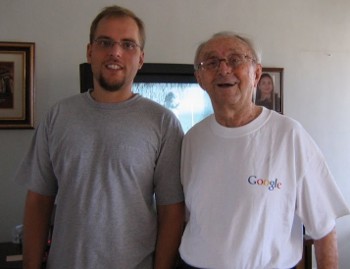 I hope so. But I wonder. I think these two generations -- my parents and mine -- may be the exception and our longevity could be less (on average) than my grandparents.

Well, it's a pure guess based on a few casual observations (i.e. totally unscientific guesses -- you've been warned).

First, let's think back as to why my grandfather, who was born in 1918, is in great health today. Many will point out to advances in medicine. That would be correct. But I think this is only part of the story. And a small part, since my grandfather has never had any kind of serious disease nor been operated on (no fake hips or knees nor heart bypasses or anything). He also doesn't take much medicine. Not because he's stubborn or anything, but because he doesn't need any.

So, okay, from this sample of one, I'm saying medicine didn't play a huge role on his longevity. Then, it's just good genes and coincidence, right?

His generation was born at a much different time. A time when abundance wasn't the norm. Food was simply food. Unprocessed, natural, local grown plants and animals.

It's not that there weren't cookies, Pringles and Coca-cola back then -- well, some of that didn't really exist back in 1918 -- but if they did exist, they were expensive. And again, this generation was not used to having plenty. And specially they didn't have lots of choices either. Again, they were limited -- and grew accustomed to -- simple foods, in modest quantities.

But diet alone was probably not the only reason.

Back then, if you wanted to visit a friend who lived 10 blocks away from you, what did you do? Did you call him up on the phone and then drove there? No and no. There was no phone, and when there was, it was expensive to use. They simply walked everywhere.

My grandfather's generation was more active than ours and my parents, on average.

Video games didn't exist. The iPhone and the internet hadn't been invented yet, so to stay in touch with people, you actually had to go and meet them.

Okay, but when Pringles, margarine, corn-fed beef, cell phones and cars were invented, why didn't they become fat and sedentary like the rest of us? My theory is that habits formed during this generation's youth persisted for a very long time. My grandfather still eats simple foods and does not have a cell phone. And meanwhile, medicine improved. So he got the best of both worlds.

My generation and my parents' generation got used to medicine bailing them out. Pain here? Take this pill! Deficiency there? There's a pill for that too! And while that was happening, food became a chemist's concern and herbicides and pesticides became more of a necessity in a mass-produced food market. All while food prices plummeted, making it cheaper and easier for people to load up on calories. And empty ones at that.

Let's not forget about modern-day stress that was a little less prevalent back then: my grandfather didn't have to worry about who could see his pictures on Facebook nor did he check his stocks holdings daily, in real-time, obsessing about tomorrow's economic indicators.

So, I do wonder if the two generations between my grandfather's and mine (inclusive) are doomed to have an average longevity that is less than that of my grandfather. And whether this next generation will be the one to truly benefit from a new conscience of health eating and living, while taking advantage of the continuing improving medicine.

Or will it take yet another generation to hammer home the message that medicine can only fix what is broken, but it's our responsibility to prevent things from breaking in the first place?

Stay smart. Stay healthy. And live a long and prosperous life. Like my grandpa.