Today was my last day of work at Google.

Wow! I never thought I'd say these words for real. But it's real.

Why did I leave?

I wanted to pursue other things, on my own. For years I've suppressed my entrepreneurial desires, and it's been too long now, I couldn't control it anymore. I first started thinking of myself as an entrepreneur when I was very very young, probably younger than nine years old. Back then I'd have called it "inventor" or something else, but now I know I was thinking of entrepreneurship. I had dreams of building something from the ground up. And I don't mean software systems. Back then, I didn't think in these terms. It was more like setting up "creative shops" and "labs" for experimentations and all sorts of crazy ideas and businesses. This desire stayed with me throughout high school and college and then it almost died during grad school. It ignited again recently and Entropy was born.

It's been a great time at Google. Excellent, actually. I met lots of smart and productive folks. What could be better than working productively in great company?

And productive it's been. Here are some numbers over these 5 years 7 months and 2 days:

Lines of code written: 187592  (or so I was told). I'm sure I wrote more outside the main trunk and also I wrote lots of code that got deleted over time.
Files authored: 474 (these are files where my name is listed as author in the main development branch. Files that were deprecated and later removed were not counted).
Candidates interviewed: 230.
Promotions: 3, from Software Engineer III to Senior Software Engineer to Staff Engineer to Senior Staff Engineer.
Management: From 0 to 11 direct reports (started with 7 when first becoming a manager).
Days biked to work: most. I wish I had tracked these.
Free meals eaten: at least 1 a day, but most likely 1.75 on average (for 2+ years it was close to 3 and in the early days just 1).
Bugs resolved: 224 (probably undercounting a bit for various reasons).
Offices visited: 9 (in 5 countries).
Managers had: 4.
Teams: 1.
Interns mentored: 5 (3 work for Google now).
Visiting scholars hosted: 1.
Papers written: 2.
Days sick: Fewer than 3 (officially just one to recover from a minor surgery, but I remember taking an afternoon off due to a bad headache once).
Friends made: Lots.
Money saved for Google: Lots (confidential).

Leaving money on the table is not what I do best. It was hard to see my 42% raise plus a kick-ass bonus within the next two months disappear before my eyes. But money is not everything in life. And guess what? The table will always be there. With cash on it. These tables are everywhere actually. It's just a matter of getting to them and claiming the prize. My goal is not to go back to grab the pile of cash on it, I'd rather build a bigger table where more money will be deposited. But it's comforting to see it's there. And after all, thinking of what's behind and worrying about it is as useful as a comb is to a fish, as we say in Brazil. So, let's not go there.

On my way out, a friend asked me if I planned to start criticizing Google now that I'm no longer "restricted" by fear of retaliation. First, I never really felt much restricted. I was criticizing what I thought was wrong anyway. And second, how could I not appreciate a company that treated me so well for so long. A company that I respected for its morals and business practices even before I joined it. And, beyond all of that, a company that even bought loads of my energy drink for its employees to appreciate? They didn't just buy my energy drink because the people I dealt with were nice (they are), but because the company itself, the institution Google, allows and encourages these nice things to happen (unlike many other companies in the valley I called to offer some Entropy).

The truth is, I don't have many bad things to say. My experience has been extremely positive there and I continue to respect Google for the great company it is, the great services it offers and the people that still work there.

Any criticism I might have to say here will be in the context of things that could be improved, rather than huge flaws. And many are criticisms of big companies, not particular to Google. As I said, these criticisms are things I was already offering inside Google anyway.

When I first told people I was leaving, everyone was surprised. They all said they were sad to see me go. But what surprised me the most was that when I offered my rationale for leaving -- pursuing other interests on my own -- no one tried to stop me. Sure, they welcomed me to stay. But no one told me what a dumb thing it was to leave (okay, Luiz Barroso did say that, but I think he was just giving me a hard time :-)). This tells me two things: First, people have way more faith in me than they probably should, and second maybe it's not that bad a plan after all.

Here are the gifts I got from my team and friends: 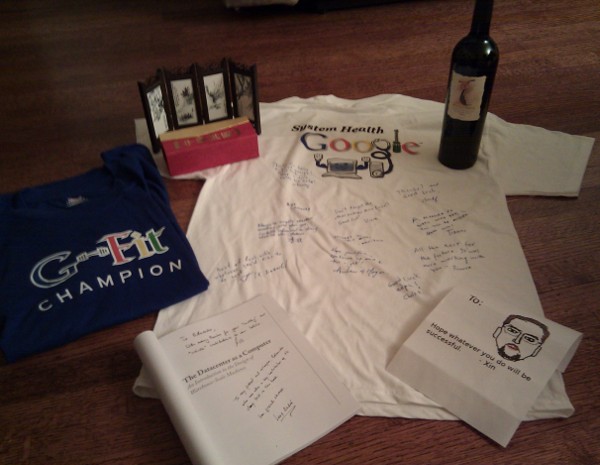 Thank you guys. Thanks a lot.

Today, the plan is to dedicate more time to Entropy. I will continue to pursue business development opportunities in general and software engineering gigs if something really interesting comes up. I'm currently looking to put together a small engineering team to build a mobile recommendation engine for niche markets. If you're working in this general space or thinking of starting something remotely like it, please contact me.

I'd love to work for Google again. But I want to resolve my life now, financially speaking. When I no longer have to worry about money, then working at Google can again be a match for my interests (a great playground for a geek like me). Right now, staying there with raises and all would mean working really hard for another ten years to become financially independent. I'm looking for faster ways. But only if it's fun. Know of anything?