What I learned from a Carnival cruise

I recently came back from a 7-day cruise to the Caribbean. It was great. If you've been to one, you know what I'm talking about: lots of fine food, great weather, no worries (other than "where's my sun screen" and "will I have time to participate in all activities today").  This particular cruise started in Miami and went to the Grand Cayman (Cayman Islands), Isla Roatan (Honduras), Belize and Cozumel (Mexico). All these places are unbelievable.

Here are some of the many random things I learned on this cruise. 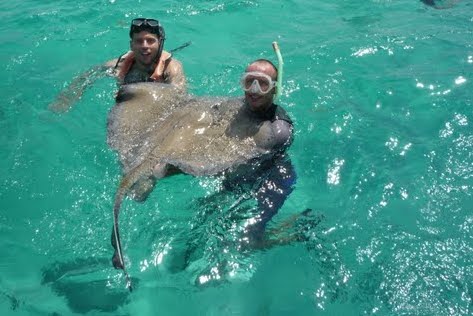 The photo above is of me and our dive instructor holding a friendly sting ray, in Sting Ray City, Cayman Islands (by the way, this is in the open ocean, not a pool or any artificial environment). Turns out, sting rays are not aggressive animals. They don't use their stings (or "barbs") to attack. It wouldn't be very efficient, since they take between 6 months to a year to grow back. It's there only as a defense mechanism. And it's a last-resort mechanism, as they need to be under very specific attacks to use it: someone must be trying to eat them from above them, immediately in front of them. They don't go pointing their tails at enemies and following them in reverse. Sadly, Steve Irwin (the "Crocodile Hunter") was one of the only three reported victims in the world to have died due to a sting ray attack. He was unlucky that his heart was perforated when the sting ray attacked him. Why it attacked him is unclear.

Sting rays are generally friendly. These for sure were. They were used to tourists. They swam to us and played with us. In the photo above you can see the contour of another two rays in the water, circling us. They are very soft to the touch on their bottom and a little hard and bumpy at the top. The string is not at the end of their tails, but about half to two-thirds down from the beginning of the tail.

Cruise ships are not very Earth-friendly.

I kind of knew this, but I never stopped to think about it: these things pollute. Sadly. 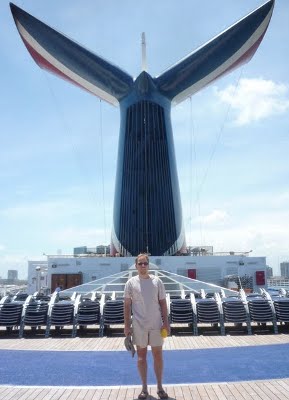 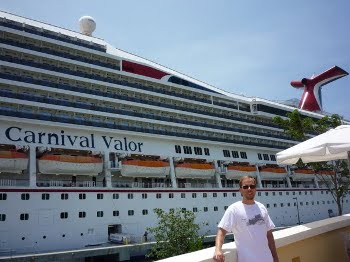 For starters, cruise ships dump all your waste in the ocean. Perhaps that's okay, since that's where it would end up anyway if we still lived as cavemen. But maybe that's not the best option anymore. I don't know for sure. It's probably more complicated than a simple black or white choice. People say the ocean can take anything and recycle it. Maybe. What I found out is that all the food we don't eat also gets recycled in the ocean. About 15 miles outside of Miami, the soft food gets shredded and dumped in the ocean. On one hand, this attracts lots of fishes, which attract fishermen who make a living catching these well-fed fishes. On the other hand, a lot of this is poorly absorbed since it contains a lot of non-food items like condiments. There are reports of "clouds" of junk in the ocean outside of Miami, mostly attributable to big cruise ships.

Also,  these things have huge diesel engines. I forgot now how many they have (I think, four), and they're constantly on, if not to move the boat forward, to cool it and power everything in this "floating city".

Crew works their tails off.

There are about six thousand people on board. About 1,100 are crew.  About 500 of those are related to foodstuff -- waiting tables, cooks, mixing drinks, busing tables. They work for eight months straight with no weekends or holidays. Then they take two months off. The waiters, however, get no salary. We confirmed this by talking to two different waiters. They only get tips. Sure, tips are included in our bill, but it's not a lot: $10 per day per person. And this tip has to be split among three waiters per table -- a head waiter, a team waiter and an assistant -- and two cleaning crew, who clean the guests' rooms. Overall, the tip is split five ways, possibly not evenly (not sure about that).

We met a waiter who told us he still had two months to go for this vacation and this time he was requesting a four-month vacation. Reason? His wife was pregnant and was due exactly at the end of his eight month shift. He said he timed it carefully so he would be present when the baby was born. Maybe that's why they keep you away for eight months instead of nine or more.

Out of two waiters and another service person we talked to, only one of them had been to shore, and the one who did was there just for a little while. No wonder. They get two or three hours break twice during a 7-day cruise. And for the waiters it's always during lunch time, when there are fewer people on board.

Nonetheless, it must be worth their time. The two waiters told us they had been with the company for a long time: eight and eighteen years, each. That's a long time to spend away from your country, your family and solid land under your feet. It's definitely not for everybody.

We also learned how strict the training to become a waiter is. They may start at the bar, mixing drinks and then they go on to serve the crew itself (they must eat too -- and no, they don't eat the same stuff guests do). Two months of serving crew they move on to shadow a waiter and then they become assistants, then team waiter then head waiter. The training must be good, because we found all of them are really good waiters.

We did visit the kitchen too, and there's a whole other blog post I could write about that. Instead, I'll just leave you with the pictures. 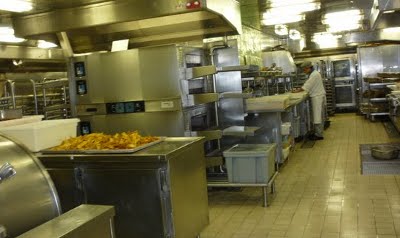 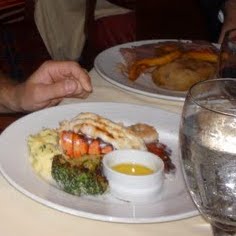 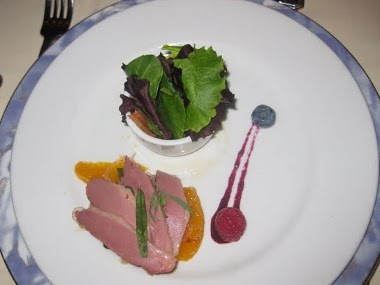 Isla Roatan belongs to Honduras, but like Belize it was once part of the UK

Roatan is an island off of the cost of Honduras. It belonged to the UK, but it's now part of Honduras. The main language in the island is English, but there are Spanish-speaking people there, from Honduras.

Belize was once called British Honduras, but it never had anything to do with Honduras other than it was right next to it. It's now an independent country but the queen of England is still on their currency. Locals say she's there to keep it from devaluing. The Belizean dollar is pegged 2-to-1 to the US dollar and it's been like that for years. Belize has the second largest coral reef in the world (second to Australia). Our ship could not dock close to shore because of the reefs, so we had to take smaller boats (called tender) in order to reach shore. The sea life there is incredible (as it is everywhere in the Caribbean).

It's interesting that in Roatan, the locals there told us that the British traded Roatan for Belize with Honduras. But this doesn't seem to match the story told by the Belizeans, who said there was a war for control over Belize and the Africans alongside with the British fought the Spanish invasion. There's some truth to both sides though as there were many wars and British and Spanish occupation of the island as well as the country of Belize. You can read more about it on the "internets", here and here.